Is the asking price too much for Vikings running back Adrian Peterson? 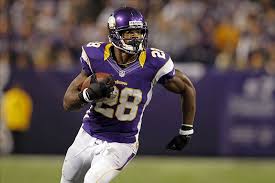 Adrian Peterson could have too high of an asking price

There was a report that came out from the Pioneer Press that said six teams were interested in trading for the Minnesota Vikings All-Pro runningback. Of those six teams, two have already come out and basically said they are not interested.

The Jacksonville Jaguars said yesterday that they were not interested in Peterson and now the Cowboys VP is saying they have no intentions to trade for a veteran back.

“I don’t see that happening,” Jones said when asked about the possibility of trading for a veteran running back. “I think draft picks are so important for us. That’s where your value is in this salary-cap era. I see us using all of our picks and hopefully do it in a good, wise way. Hopefully when the draft is all said and done, we’ll have really improved our football team. I don’t see us using any picks to trade for veteran ballplayers.”

It makes you wonder if the Vikings are asking too much for Peterson, because two teams have quickly removed their name from the sweepstakes for the 30 year old back. What do you think he is worth?