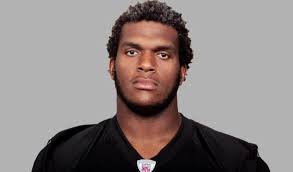 Former Oakland Raiders offensive lineman Kwame Harris was arrested Sunday morning and attempted to bite a police officer’s hand, according to a report from NBC Bay Area. San Francisco police said they found Harris unconscious behind the wheel of his car with the engine running, and that when police tried to handcuff Harris, he tried to bite an officer’s hand.

Harris was convicted in 2013 of misdemeanor domestic violence and battery for beating his ex-boyfriend during an argument.