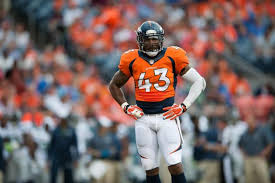 T.J. Ward was one of the best safeties in the NFL, before leaving the Cleveland Browns last season for the Broncos.  He still has close ties and friends in Cleveland. Since Johnny Manziel is a huge topic still, Ward was asked on Tuesday, while a guest on The Sports Show, about Manziel and his former team. Ward’s response:

“I still keep in contact with a lot of people out in Cleveland and they give me a little back story about what’s going on sometimes,” he said. “They just really don’t know if he’s the man or not, basically, and they’re trying to get him to mature up and be that guy, but can he?

“This is a quarterback league. You’re starting to see that shift a little bit to running the ball, with the success the Seahawks have had, the Cowboys. The running backs are getting a little bit more recognition, but it’s still a quarterback league. So if you don’t have that quarterback, if you don’t have that man at the helm — even if he’s not out there Peyton Manning it, doing all of this (directing motions with his hands) changing everything around, you still have the Russell Wilsons that are going to make plays when they need to be made and control the game.

“So, regardless of what’s going on, the quarterback is going to run everything. If you don’t have that guy, then you’re dead in the water.”

This is not surprising, it seems like the Browns are ready to move on from Johnny Football after just one season.