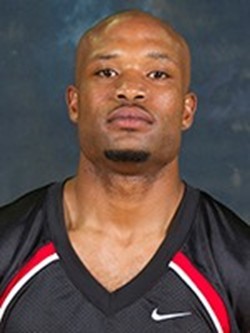 In addition to Florida State, I was recruited by Clemson, Florida, Miami, Arkansas, Alabama, Auburn, and others

Family, location, coaches, and the opportunity to play as a freshman

My parents are my role models because they instilled important values in me like work ethic, honesty, and integrity

I have met with several scouts from the NFL since my Pro Day. Most have been saying that my size and speed will be an asset at the next level

I also played basketball and baseball growing up

I’ve played every position except on the offensive and defensive lines. I even kicked field goals and punted and wasn’t too bad at either (laughter)

What separates me from others is my size, speed, and the way I attack the ball. I also have tremendous body control to adjust to passes. My football intelligence and understanding of the game helps me to find holes in zone defenses and allows me to beat man coverage.

I look for certain players and tendencies. Learning these tendencies and having the intelligence of the game allows me to take full advantage of the opposing scheme. My preparation allows me to really slow the game down.

The toughest player I ever faced was Nigel Bradham, who is now a NFL linebacker for the Buffalo Bills.

Physically, I compare myself to Andre Johnson because of our size and athleticism are very similar. Mentally, Steve Smith Sr. because of his attitude and passion for the game.

My biggest obstacle was not attending the college I originally committed to and furthering my career for the NFL. I took a different route but the adversity has made me stronger and prepared me for the expectations of the NFL.

I didn’t really have a pre-game ritual growing up but now that I have a little girl, I make sure I talk to her before every game.

My biggest strength is my versatility. I love to have the ball in my hands when the game is on the line or when we need a big play. I want to be that go-to-guy and the type of player that a team can rely on in the clutch.

When I come to learn of my biggest weakness, I will let you know (laughter)

I’m that type of player that the NFL and fans have been waiting for. Every team could use a player like me both on the field and in the locker room. I have been apart of a championship team and promise to bring a champion’s attitude everyday. As Vince Lombardi said, “Winning is not a something thing; it’s an all time thing.”

My favorite player was Sean Taylor, RIP. My favorite NFL team growing up and to this day is the Tampa Bay Buccaneers.