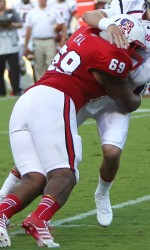 What is your name

What school do you attend?

I believe there were ten teams who recruited me out of high school.

My mother has a problem with flying, so I wanted to stay nearby so she could drive.  I also looked at defensive schemes, fan base, and education.

My father is my role model.  He has a construction business and he has worked so hard to get where he is.  He is man of integrity and I deeply respect that.

I have met with three scouts, so far.  They state that I am a great football player, they like my speed and my overall athletic abilities as big man.

I played baseball and tried out for basketball a couple times.  I started playing football at age 6.

Oh yeah.  I started out as a running back then moved to a TE, then linebacker and DE, and then I played OG & DT.

The way I use my hands and my first step separates me from others.  I don’t get beat too often because my hands are so good.

First off I look at the down and distance to see whether it’s likely to be run or pass.  Next I look at the personnel, which often limits the plays they can do.  Then I check out the backfield set (one or two back, strong or weak).  Lastly, I look at the offensive linemen’s stances and splits because this tells me the type of blocks I will get.

Jonathan Cooper, North Carolina, was the toughest player I’ve ever faced, as he’s a great athlete for his size.  He has the footwork and power that he needed to get the job done.  I didn’t see any other OL that moved like him.

I grew up in a rough place with limited opportunities and programs for kids.  So in college I had to adjust to a different lifestyle where there was so much more available to me.  I was overwhelmed by everything and, at first, hesitant to try new things.  However, through my years at NC State, I’ve grown and matured a lot and opened my horizons to new things.

For any pre-game rituals, I like to lay on the floor, put my feet in the air and listen to music for a few minutes.  This helps my body to relax, get loose before the game and play relaxed and lose in the game.

As a player, my biggest strength is my ability to read players and to identify which schemes they are going to use against me.  As a man and a player, my pride and competitiveness – I hate to lose!

My biggest weakness, I hate to lose … and sometimes you do.

You should pick me because I am consistent, a great player and I am versatile.  I can play any position on the DL – you can play me inside or outside, it doesn’t matter.  I am very versatile.

Growing up my favorite player was Eddie George, RB, Titans. I like that he played hard and carried himself the right way.  I looked up to him.  My favorite team is the Philadelphia Eagles.  I like how they play the game – it’s always fun to watch them play.

Michael Jordan, who was one of the best basketball players ever.

Denzel Washington because he’s my favorite actor.  He can be the good guy or the bad guy.  He never lets me down in any movie I’ve seen him in.

President Obama because he’s the first black President of the United States.