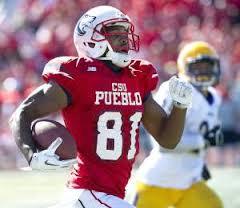 What school did you attend?

I ended up at CSU-Pueblo after not really having any other options coming out of high school. My high school football team didn’t do too well my senior year and I didn’t get much exposure at my school for various reasons so most of my D1 opportunities dwindled away as signing day got closer. Luckily, a couple of coaches from CSU-P hit me up, I took a visit to Pueblo, saw an opportunity to do something great and I took it.

Kobe Bryant is a guy I look up to because he’s a guy who came into the league with a lot of doubters, a guy who put up 3 or 4 air balls to help his team lose in the playoffs early in his career, ran into some family issues off the court — still he doesn’t let any of his failures define him. Plus, the man is the definition of hard work.

Yeah, I’ve met with several NFL Scouts and they mostly asked me questions about myself and my past — not too much about what they think or their opinions. I’ve noticed they do a lot of writing though.

Basketball, baseball, and track… even tried tennis for a year

I’ve done everything but play on the line and kick. I like to think that I was a pretty good safety.

I think I separate myself from other wideouts with my combination of size, speed and my ability to play the ball in the air.

How the defense lines up in certain coverages and any telltale signs a defense or corner shows that gives away the defensive coverage. 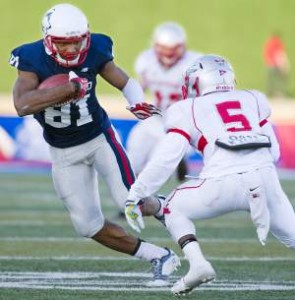 The toughest players I’ve ever faced are my former teammates CJ Roberts & Stephan Dickens. They’re great competitors. We use to go at it in practice at CSU-Pueblo.

If you could compare your play in one player in the NFL, who would it be and why?

Dez Bryant, we’re the same size, both strong physical receivers, play the ball well in the air. We win on the go/fade ball. We even have the same 40 time.

Dealing with my injury riddled senior season was tough at CSU-Pueblo. I was supposed to be an All-American and shatter the school record book but I tore my meniscus early in the season and then sprained my MCL a couple weeks after returning from the meniscus, keeping me out of 8 games. I overcame the injury by being around the people that matter most in my life. They helped me realize what’s important in my life and what things I had taken for granted. I challenged myself to comeback better than I was before, physically and mentally — I believe I did that.

As part of my pre-game rituals, I like to get a last minute film session in and a quick lift in.  One thing is for sure, I gotta have my music.

I’m a big receiver who goes up strong to get the ball in the air.

I’m a physical, big body receiver that’s gonna go up and fight for the ball. I’m a guy you can count on to give you everything I got. I come to work every day with a mission to get better and I come willing to learn.

My favorite player was Deion Sanders, he was just crazy good. The team I used to root for was the Dallas Cowboys.

Jesus Christ, doesn’t get any better than that. 2. Kobe Bryant, he’s an awesome competitor and I know he’s got some knowledge to drop on me. 3. Terrell Owens, he’s another small school guy who fought for everything and earned his respect in the league.  He’s a guy I’ve modeled my game after.