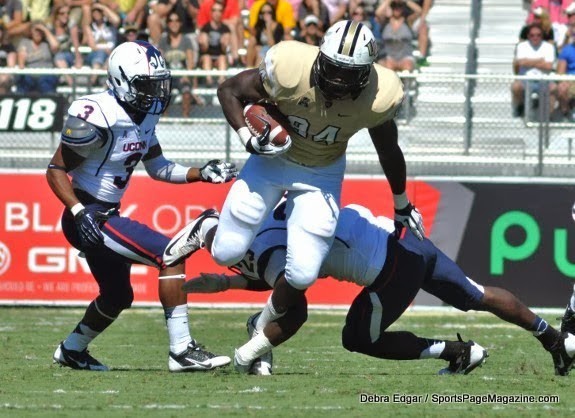 The University of Central Florida.

Program history, coaching staff and what they asked of the tight end position in that program.

I actually have two, both are my cousins Joshua Scott and Robert Smith. I had the opportunity to go stay with a little bit before college started. The way they carried themselves and kept a steady head throughout any situation whether it was positive or negative.

I have met with a few scouts and they ask a lot of background information on you- about your family and where you are from and as the process goes on they are focused o n football. I am blessed to have this opportunity to go through this process.

Yes, I saw myself primarily as a basketball player

I also played defensive end and have been working on my long snapping skills.

The little things I do without the ball that goes unnoticed like cutting off linebackers aligned deep inside and communicating all indicators that other guys on the line can’t see. Playing to the whistle.

Alignment of the defensive line for gap responsibility, linebacker depth when they rush compared to dropping, safety location- middle field open, middle field closed, if the safeties are caping linebackers, helmet stripes of the linebackers, stance keys. Any little thing that will give me the upper hand to know where my opponent is going.

Darius Nall of the University of Central Florida.

Jason Witten of the Dallas Cowboys.

What was the biggest obstacle in your life you had to overcome, and how did you overcome it

Mine would have to be living in Orlando preparing for the season and my mom sending me a text saying they may be losing the house. They were living check to check and she became I will then.

I use to go on YouTube and watch inspirational speech videos over and over again right before we went out on the field.

My size, ability to block in space as well as on the line, my ability to feel out the game and decipher where defenders will be based on film and gap responsibility.

I have worked very hard at perfecting my route running and leverage and have focused on finishing the plays. My junior year, I had more opportunity catching the ball and if the opportunity doesn’t happen in a game you have to continue to perfect it in practice. These are two things I’ve focused on during this training process with some former NFL coaches as well as from players like Jared Cook of the St. Louis Rams and Jordan Thompson of the Detroit Lions.

I’d say I going to go work harder than anyone else and going to come in shape, ready to learn with a lunch pale mentality. During all my down time, I will be in my playbook learning the offense. As a TE, it is your responsibility to know everyone’s responsibility on the line and I am going to work hard to learn it as fast as possible. I am going to work my w ay on all specials teams and learn what my special teams coach wants of me. During practice, I am going to make every rep count whether it is 1 or 15. When I’m not in, I will betaking mental reps to make sure their is no drop off when I get in and I will make sure I a m ready when my name is called in practice and meetings.

Shannon Sharpe- Tight end for the Broncos and Green Bay. I didn’t really have a favorite team, I would always choose from the teams that were playing.

My Grandma, my Grandpa and Albert Einstein.