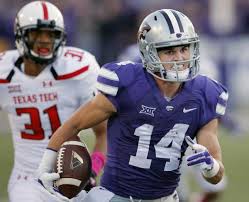 What School do you attend?

How many teams were recruiting you out of high school? The only FBS offers I had were Kansas State (greyshirt), Wyoming, and Air Force. I was really focusing on three Ivy League schools, Harvard, Princeton, and Columbia, towards the end of my recruitment before K-State offered.

I grew up a huge K-State fan, so it was always a dream and a goal of mine to play close to home where all my friends and family could be at every game. K-State was a no brainer for me once they offered.

I grew up on a farm in Abilene, Kansas. A town of about 6,500 people 40 minutes West of Manhattan.

My parents are my role models. They both work extremely hard and are very modest people. They instilled work ethic and good morals in my siblings and me at a young age.

I talked with several at the Medal of Honor Bowl after the season and a few more at my Pro Day. They all love my ability to get open and find holes in zones and catch the ball. Most of them have said I would be a late round draft pick or an undrafted free agent.

I played a little Quarterback in high school as well as Free Safety, and I returned punts and kicks, too. Some schools recruited me to play Safety out of high school.

I would say my football intelligence and hands are what separates me. I have a good understanding and feel for the game that allows me to beat man coverage and find holes in zones. 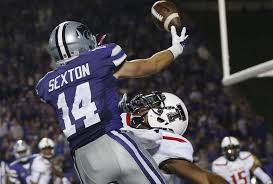 I look for tendencies more than anything. Not only in the defensive player, but within the scheme. I like to look at their typical coverage in a certain down and distance, so I know what to look for at any given moment in any situation. Knowing tendencies and having an idea of what to expect helps slow the game down so much.

Jason Verrett, from TCU was the best one I faced in college, but he matched up most of the time with our other Wide Receiver, Tyler Lockett, so I didn’t work against him too much. Sam Carter (TCU), Quandre Diggs (Texas), and Myles Jack (UCLA) were all really good players that I battled with in the slot.

If you could compare your play in one player in the NFL, who would it be and why?

I know this won’t surprise many people, but I would say guys like Wes Welker, Danny Amendola, and Cole Beasley are a few that I am similar to. Like those guys, I am an undersized guy who doesn’t necessarily have the speed to take the top of the defense, but I can work the slot and find ways to get open and move the chains. That is something all those guys and more like them have done to create a niche for a guy like me to have a chance in the NFL.

No, I just like to stay loose and enjoy everything that takes place during game day. Football is fun, so I try and treat it that way.

Football IQ and my hands.

Every team could use a guy like me. I’m tough, I can catch, I’ll go across the middle and do all the dirty work. I can play on every special teams unit, and I will always compete. I hate losing more than anything, and I will be a great teammate.

My favorite team has always been the Green Bay Packers, and my favorite player was Brett Favre.

I would choose Michael Jordan because he is one of the greatest athletes to ever play any sport, and he was such a fierce competitor. I would also like to talk to Tiger Woods. In his prime, he changed the face of golf. His excellence was something I don’t take for granted because it is so rare. He was also a guy who couldn’t stand to lose. The last one would be Dwight D. Eisenhower.  He was the 34th President of the United States, and he was raised in my hometown. I’ve learned so much about him growing up, but he would be a guy I would love to have dinner with. He was a Five-Star General as well. Three guys who were all great at what they did.