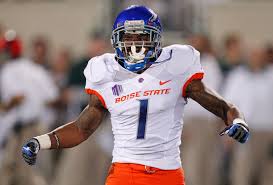 I play CB, kick return, and punt return. I can also move to WR.

I really had a connection with then DB coach Marcel Yates. He was the first coach to tell me that he really believed in me, we clicked on all levels.

I keep in contact with the Steelers scout on regular and I’m hearing that the Rams, Chiefs, and Cowboys are starting to take look at me.

Before football, I was a real good baseball player. My dad and I would hit the field every day to practice. I pitched and played SS. I also played travel basketball in Carson, CA.

I played a lot of WR my senior year HS, over 800 yards receiving and 4 touchdowns that year. 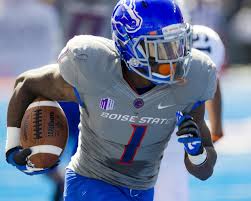 I believe my skills are second to none. My footwork, my ball skills, my coverage is all top notch. I am a very consistent player. I am also able to move to slot WR, return kicks, and return punts. My speed allows me to be able to be used in many different ways.

I look for tendencies, hand signals, familiar formations and how the WR is with and without the ball.

I would have to say that going up against Matt Miller every day in practice was harder than guarding most WR’s in a game situation. He’s big, runs great routes and has the best hands in college football.

I see myself as a Brent Grimes type of player. He has a similar build to mine, he’s very smart and very athletic. He got his opportunity and look what he’s done with it. I plan on doing the same thing!

As a high school player, most colleges told me that I was too small, too skinny, or not P12 type of guy. I made it a point to prove every one of them wrong when Boise gave me the chance to play college ball at a DI level.

Yes I do. I’m a high energy type of guy, so I’ll be listening to music and dancing a lot. I’ll also will be getting the guys pumped up too.

My agility, quickness, endurance, athleticism and my overall knowledge of the game. I like to out think my opponent, get inside his head and know what he’s going to do next.

Sometimes I tend to over think sometimes.

Whichever team takes me this year will be getting one of the most versatile athletes in this draft. I am a guy that can do it all; return kicks and punts, play outside or inside to cover the smaller, faster slot receivers and I can most definitely go over to the other side of the ball and make plays as a slot receiver. I went to college, I did my job without getting in trouble, I am the ultimate team guy and a leader in the locker room. Give me the opportunity and you will not regret it.

My favorite player was Randy Moss for sure and my team has always been the Colts.

Steve Jobs, Fredrick Douglas, and my childhood friend Neko Sanders who was struck by a car in 2012 and soon after passed away.