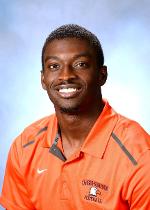 Eight teams recruited me out of high school.

I chose Carson-Newman because the coaches showed me the upmost respect and the players were genuine; as well as, the university offered good academics.

I am from Pendleton, South Carolina

My role model is my mother because of her determination and drive; her willingness to never accept no as a final answer. She is an extremely hard worker and always will do what it takes to get the job done. I will always strive to become half of what she has accomplished.

Yes, several scouts have been in contact with me. The scouts have said that a have great hands, good size, good route running, good speed and athletic ability.

Yes, I played and lettered in basketball and track & field, also played soccer.

I take a lot of pride in going up and attacking the ball at its highest point; as well as, releases and getting open

When breaking down film I tend to focus on what I could have done better or did incorrectly from the last game(s) and practice(s). I also find out a lot about who’s in front of me and their tendencies when guarding receivers.

I would have to say Dez Bryant in likeness, but not comparison. I believe that I bring a certain style, strength and ability to this game that would be like no other.

To date my biggest obstacle was graduating college in four years while playing football. I achieved this by having a big support group and staying focused and disciplined everyday.

I listen to the same song right before we go out for the coin toss and I always meet with my roommate before the game.

My biggest strength is I am very coachable, determined and adaptable.

My biggest weakness is achieving perfection.

I would eat dinner with Sammy Davis, Jr., Bill Maher,  and Angelina Jolie