Cowboys are no longer the favorites to land Adrian Peterson; 3 teams interested 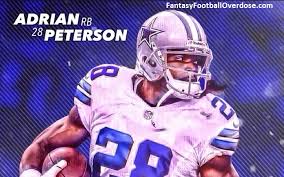 Adrian Peterson to the Cowboys might not happen after all…

Today Bickley and Marotta on Arizona Sports 98.7 FM Wednesday, hosted Yahoo! Sports NFL columnist Charles Robinson who said he is 100 percent confident that if the Arizona Cardinals called up the Vikings and offered their first-round pick for Peterson, Minnesota would listen.

But he said the teams who were once interested are falling off one by one.

Of course, just because the Cowboys many not be in the running does not mean the Cardinals are likely to swing a deal for Peterson. They are one of a handful of teams to have been linked to the running back, but assuming the Vikings ultimately decide to acquiesce to their star’s request, it would then be up to Arizona to come up with the best offer.

According to Robinson, the three teams left in the race are the Cardinals, the Tampa Bay Buccaneers and the Jacksonville Jaguars, though he would not rule out the Atlanta Falcons.