Could the Eagles have a linebacker on the trade block? 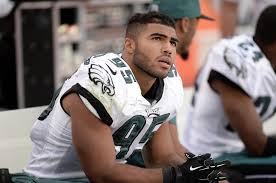 Mychal Kendricks could be on the trading block

The Eagles have Mychal Kendricks, Kiko Alonso, DeMeco Ryans, Brad Jones, Najee Goode, Emmanuel Acho, and Brandon Hepburn all on the roster, but could one be dealt soon?

Mychal Kendricks has one year left on his contract and the team has recently traded for Kiko Alonso and given DeMeco Ryans a contract extension.  While it is a great group of linebackers, It would be interesting to see them deal Kendricks.

Kendricks is one that makes the most sense, because the team has he has great value. If Alonso, Ryans and Kendricks are all going to be with Eagles in 2015, if Kendricks is part of the club’s future, what could the Eagles want with another interior linebacker? Clearly, something isn’t quite adding up here, no matter what the head coach says.