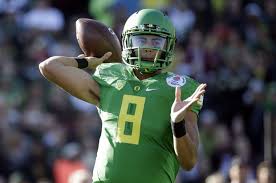 Browns covet Mariota, but do they have enough ammo to get him?

Ian Rapoport of NFL Media is reporting that the Cleveland Browns “covet” Oregon quarterback Marcus Mariota. Cleveland has already spoke to teams drafting inside the Top 10 about possibly trading up, according to Rapoport.

Ian Rapoport    @RapSheet
#Browns have had talks with #Redskins over the past week about potentially moving up to No. 5. They’ve touched base with most Top 10 teams

The Browns have already spoken to the Redskins specifically about their No. 5 overall pick. However, this would require the Titans to pass on Mariota at No. 2 and for no one to trade up with the Jaguars and Raiders for the Heisman Trophy winner.

The Browns do have two draft picks in the first round, but it may be hard to move into the top 5.