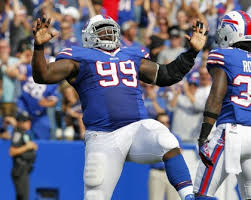 The Buffalo Bills have been building a monster this year, but there was a cloud that was hanging over the team which was Marcell Dareus’ misdemeanor charges for supposedly racing his teammate Jerry Hughes in Orchard Park, New York.  Those charges could have led to an NFL sanction, but today Dareus reached a plea agreement to have the charges dropped from the incident, where he crashed his Jaguar into a tree near the Ralph last year, according to the Associated Press.

He agreed to a pair of traffic violations — failure to keep right and imprudent speed — which carry a maximum fine of $150 each. He also promised to conduct a free football camp for area high school players this summer.

This was a smart thing for Dareus to do, because the free football camp for kids will give back to the kids in the area, and will also work as a community service project.

I hope Dareus learned from his mistakes….