Aaron Hernandez’s prison I.D. card is being sold on Facebook for 6,000 dollars 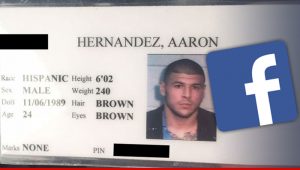 Aaron Hernandez’s Prison ID is for sale. Do you have 6K Dollars?

People are insane, and they will buy killer’s merchandise for some reason.  Well now you can own an authentic Jail I.D. card of Aaron Hernandez, the former New England Patriots star.

Aaron Hernandez‘s jail I.D. is for sale, and while Criagslist blocked the seller from selling it, he is trying his hand on Facebook according to TMZ Sports.

The man who currently has the I.D. says he happened to come across the item during his stint at Suffolk County Jail, where Hernandez arrived in July 2014. Who knows if he was working there or was an inmate…..

He tried selling it on eBay, but the site killed the auction. Then he moved it to Craigslist, which also shut him down. So, now he’s moved to Facebook. He is looking for 6k dollars for the item….