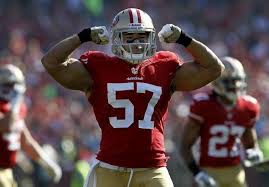 The San Francisco 49ers were trying to trade Michael Wilhoite a few months ago, but that was before Patrick Willis and Chris Borland retired.  Now the 49ers are trying to do anything they can to keep Wilhoite under contract.  Wilhoite’s role has increased quite a bit and now the former special team ace, who was forced to play last year after an injury to Navorro Bowman, is about to get paid.

49ers General Manager Trent Baalke said Friday that the team is working on a new deal for Wilhoite, who is an exclusive rights free agent. He hasn’t signed that tender, and but he started 16 games after Bowman went down.  The 49ers need to re-sign Wilhoite because they have a gaping hole.

“We’re working on something with him as we speak … He’s kind of in a unique situation. He was kind of caught in a numbers deal,” Baalke said, via the San Francisco Chronicle.

This is a pretty interesting scenario, because it leaves the 49ers in a pickle. If I was Wilhoite’s agent, I would want a nice extension. Especially since it was in the news that they wanted to trade my player. Wilhoite holds the cards right now, and the 49ers could be forced to give in.