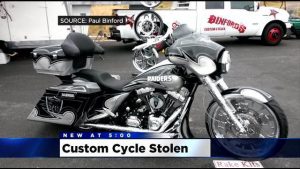 We would like to help out a Raiders fan. Someone stole a Harley Davidson that was customized for an Oakland Raiders fan, valued at nearly $100,000. The theft happened sometime between last weekend and Tuesday when the motorcycle was in a trailer at Paul Binford’s storage facility in Manteca.

Aside from the recognizable Raiders designs, Binford says his crew put 500 hours of etching into the bike, making it hard for the thief to do anything with it, since it’s so recognizable.

“We’re gonna sit and wait and watch everybody rat on each other and try to recover the bike,” he said.

The future owner, who hasn’t even had a chance to ride the bike yet, has put out a $5,000, no-questions-asked reward on the bike.

Help find the bike and get 5k dollars from Binford, not a bad deal. Hopefully they find it soon….