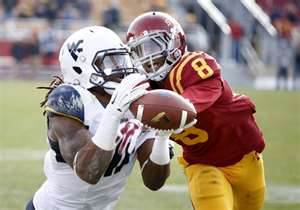 People put way to much time in football players forty times.  NFL teams are fascinated by speed, and that is great, but if you cannot catch it does not mean too much.  While last year’s draft was amazing at the wide receiver position, this is a very interesting note.

What does that mean?  Well it is pretty simple, just because you run a 4.2 forty or blaze the track up, it does not mean you will be productive.  Remember that when you are looking at Kevin White as your wide out, compared to Amari Cooper?

I still feel Cooper is a way better prospect, but he ran a 4.42 while White ran a 4.35.  That stat is scary to me, and from analytic stand point, I would be scared of White.

White was impressive at WVU, but so was Ronald Caldwell, Tavon Austin, and Stedman Bailey.  West Virginia wide outs have always ran fast and looked good, but can they have a good NFL career?  Before you jump on the White before Cooper bandwagon, look at the entire picture. Cooper has been a beast for years.

People have Kevin White ahead of Cooper, but White has only really had one good season.  His career receptions are 144 receptions for 1,954 yards with 15 touchdowns, while Cooper has 228 receptions for 3463 career yards and 31 touchdowns.  So before you crown White a better receiver, you might want to go back to the film.  Also keep in mind, Cooper plays in the SEC!!!!