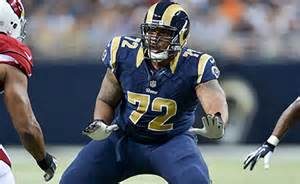 St. Louis Rams starting right tackle will not return to the team. According to Jim thomas of the St. Louis Dispatch, Joseph Barksdale will test the market. ESPN’s Nick Wagoner also reported there was a likelihood Barksdale shopped around.

The Rams and Barksdale’s representation have not been able to find a middle ground on a contract, the Post-Dispatch reported.

The 26-year-old Barksdale has started 29 of the last 30 games for St. Louis, including all 16 this season. A 2011 third-round pick of the Raiders, Barksdale (6-5, 326) joined St. Louis in September 2012 after Oakland waived him early in his second season, according to Pro Football Talk.