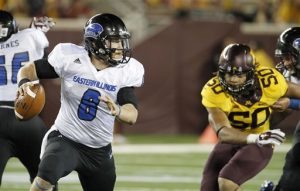 Las Vegas, NV (March 2015)- 2015 draft eligible quarterback Andrew Manley has announced that he will be attending his second pro-day, on March 25 at Illinois State University in Normal, IL.

“I’m excited to attend their (Illinois State University) pro-day. They just went to the FCS championship game and have a lot of talented players. It’s a privilege to have the opportunity to work out with them,” said Manley.

The announcement comes two weeks after Manley completed his pro-day at Northwestern University. Manley was only one of two Eastern Illinois panthers who were asked to continue workouts in front of scouts on March 3, the other being wide-receiver Adam Drake. According to sources at the pro-day, Manley garnered the attention of scouts from NFL teams including the Miami Dolphins, Jacksonville Jaguars, St. Louis Rams, NY Giants and Philadelphia Eagles.

Eastern Illinois University did not host a pro-day this year for their players, making Manley and his fellow EIU teammates eligible to attend workouts at other universities in the state.

Following the 2014 season Manley attended the NFL Regional Combine in Denver, CO on February 21. He was also appeared in the 2015 Dream Bowl and the 2014 FCS Scout Bowl. Manley is currently training at Athletic Gaines in Las Vegas, NV.

Manley is represented by Paul Sheehy of Pro Star Sports Agency. For more information regarding combine/pro-day results or to schedule a workout, please contact Paul at (303) 948-1510, email paul@prostaronline.com or visit www.prostaronline.com

Andrew Manley completed his college career at Eastern Illinois University (EIU). Prior to transferring to EIU in 2013, Manley threw for over 4,000 yards during his 3 year career at New Mexico State University. As a starter Manley led the Aggies to their first win against a Big 10 opponent during the 2011 victory over the University of Minnesota.  Manley is a graduate of Leilehua High School and a native to Wahiawa, HI.  A complete bio and list of his stats can be found at www.akmanley.com.