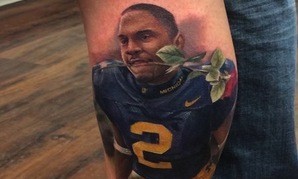 Michigan football fans are wild, nuts and faithful, but this fan is more than that.  He is awesome, especially when he finished his tattoo and showed it off to the world via Twitter.

The tattoo is of Charles Woodson the former Heisman Trophy winner after beating Ohio State to go to the Rose Bowl for Michigan.

The Raiders re-signed Woodson to a new deal covering the 2015 season. The Raiders’ starting free safety, Woodson notched 113 tackles and intercepted four passes in 2014, his 17th NFL season. He turns 39 in October.

The No. 4 overall pick in the 1998 draft, Woodson played his first eight NFL seasons with Oakland before signing with Green Bay in 2006. Woodson went on to have a splendid seven-season run with the Packers, highlighted by Green Bay’s victory in Super Bowl XLV. Woodson ranks 11th all-time in career interceptions (60).