One Clemson player tore up his Pro Day; No it wasn’t Vic Beasley 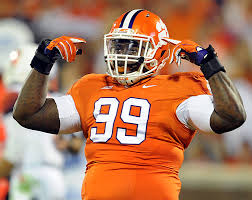 We already know that Vic Beasley is a stud, but there was another player that really tore up the Clemson Pro Day.

It was early morning and my phone blew up from text messages from scouts telling me that DeShawn Williams the former Tiger defensive tackle had a huge day.

The first NFC North scout texted me this:

Man I just found you a Diamond in the Rough; DeShawn Williams is tearing Clemson’s pro day up

I then received a text message from a NFC East scout, saying DeShawn Williams is a freak!

I replied, why what happened, and was sent this video:

I was amazed myself, so then I asked the scout if he had any other videos, he said he will get one for me.  The next is a video of DeShawn hitting the bags, and he is a ways back and it sounds like he is hitting you.