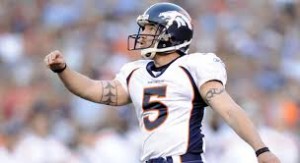 According to the Denver Post’s Mike Klis, the Detroit Lions have signed kicker Matt Prater to a new three-year deal.

Prater, 30, was the Broncos’ kicker for six seasons from 2008-13. His 2013 season was one of the best in NFL history as he made 25 of 26 field goals, missing only once from 52 yards. Included among his successful attempts was a 64-yard field goal in frigid conditions that broke a 43-year NFL record.

This is a huge deal for the Lions who struggled at the position early in the season.