Is the NFL about winning or media perception? It pays to take a chance 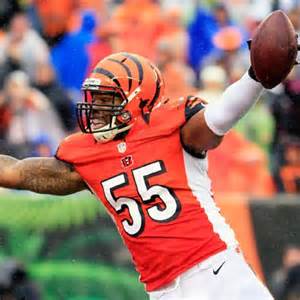 I usually wouldn’t waste my time about media perception because I understand that Media is all about making money.  Juicy headlines make juicy wallets, and that is understandable, but I have a problem with the way the NFL is being ran right now.

Every year players will fall in the draft, and they eventually get a shot on a team because of their past (i.e. Vontaze Burfict, and A.C. Leonard).  People will say many things about a player like Johnny Manziel who is a very dramatic football player, while a great athlete and college player, he has been suspect in the NFL.  The media is all over him because he gives them headlines.  His name sells, sales are a major part of the NFL.  Before the Ray Rice incident, many domestic violence cases were probably swept under the rug. It was not a big deal, but when the media grabs a hold of the tape, the NFL grabs their junk (so to speak) and hides.  They know they have been covering up information for years, but many players suffer from their reactions now.

Now because of media’s perception and bad headlines, NFL teams will not give guys a second chance. Guys like Richie Incognito (who was accused of Bullying), had to wait to get an opportunity, while guys like A.C. Leonard are still sitting at home trying to find a job.  Leonard was a 4 star tight end coming out of the University of Florida, but after getting charged with misdemeanor DV case, he cannot find a job.  My question with this is simple, before you would sweep an incident under the rug, but since Ray Rice’s case went media main stream, Leonard’s shot is almost impossible.  Teams are not willing to take a chance on a player with a person who has had a clean record for 3 years, but forget the talent he has.

Since 2003, 20 tight ends have run the 40-yard dash in 4.60 seconds-or-faster. Only 1 such tight end went undrafted: Tennessee State’s A.C. Leonard, who was not selected after running a 4.50 second 40-yard dash in 2014. Ten of those 20 tight ends recorded at least one NFL season with 5+ TD receptions, according to NFL.com.  I am not defending A.C. Leonard, I am just trying to shine a light on success.

Check out our Path to the Draft with A.C. Leonard

NFL teams would have a 50 percent chance according to statistics/analytics that A.C. Leonard the former University of Florida tight end would score 5 plus touchdowns in a season, and they would rather take a tight end who is slow and can’t catch.  Same thing with Ray Rice, teams would rather have a back that is arrested for DUI’s, or a player that is plain and simple not good, WHY IS THAT?

I will tell you, it is because of Media’s perception/Media Circus. The NFL does not want the headache of having to answer questions regarding a player on the 53 man roster. Tim Tebow is a perfect example of the media circus. This is a fun loving, decent quarterback who was a winner in college.  The media loved him because he was a true role model for young and upcoming kids.  The media should have gave the man media love, because he was living life the correct way. He was serving God, a virgin, who wanted to try to walk in the same lifestyle as his Savior.  Just like the Bible though, he was persecuted because of it. While he may no longer be in the NFL, Tebow is still a very good role model for people.  Manziel on the other hand is a guy that is partying/and throwing money around, but teams would rather have that media perception?

I am confused, because a couple years ago Vontaze Burfict, the starting linebacker of the Bengals went undrafted.  He went undrafted because he had several hard penalties on the field, and had a fight in the locker room. If you throw in the bad season year, and the combine fiasco, he was still passed over.  Only the Bengals offered him a shot, guess what happened?  He is a Pro-Bowler!

Let’s look at Michael Sam, he is another guy that hasn’t had a shot because of perception. This kid was the SEC Defensive Player of the Year.  He can play football, but he is GAY.  Because he is gay he get’s media attention.  That media attention has ultimately kept him out the league.

So here is my question, why are NFL teams who are in the business to win, overlooking players who have talent because of media attention?  Isn’t the goal to win?  If you look at the Bengals, at least you can commend them for giving Burfict a fair chance.  They had a coach that was willing to put his foot down and really work with a player.  He has since been given a pay raise, and now he is known as a Pro Bowl linebacker in the league.  When will the NFL forget about what the public thinks and make moves that improve your football team?  The Buffalo Bills just signed Richie Incognito, I bet you that move pays off for them as well too.  Let’s see, but until then the ball is in the NFL’s court.