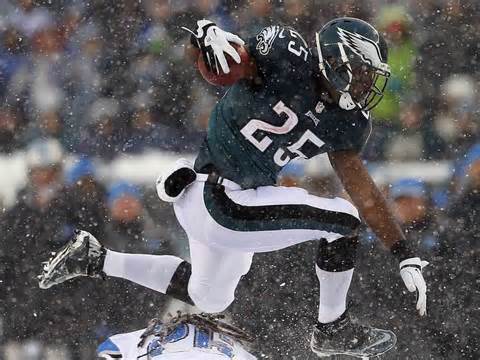 The Dallas Cowboys may be losing DeMarco Murray to free agency, but could the team upgrade Murray? It will not be easy to upgrade what Murray did last year, but there is one guy who I feel still to this day could replace Murray, and if he had the Cowboys line could dominate the NFL.  That player is Shady McCoy.

While everyone wants to keep putting Adrian Peterson in Dallas, the Cowboys would have to trade picks to land him.  I cannot see the Vikings letting him go very cheap, but the Eagles on the other hand will not pay Shady McCoy his base salary this year.  With Chip Kelly in charge of the football operations, it makes you wonder if he will ask Shady to take a pay cut?  If he does and Shady says NO, the Eagles may release him.  Remember the person controlling his future is the same guy who failed to use him properly, and let Darren Sproles take the abundance of the carries, as well as Chris Polk at the goal-line.  I could see Shady getting cut, and if he does DALLAS makes sense.

Dallas could bring LeSean McCoy in and he will still be getting paid a decent amount of money from the Eagles.  The Cowboys can offer something no other team offers him, and that is guaranteed playing time under the best offensive line in the NFL.  Not only that, there is a perk to play for the Boys, Shady can face the team that released him twice a year.

McCoy might see the yardage that Murray put up and jump on that deal fast.  If he does, watch out Eagles fans, because your team could be headed in a downward spiral, especially if your new GM/coach trades his draft picks away to land a suspect quarterback in Marcus Mariota….