If Bills lose Jerry Hughes, Brooks Reed could be an option 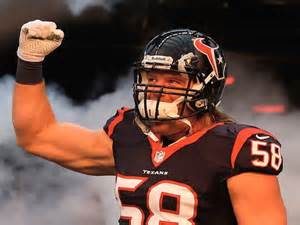 The Buffalo Bills have been negotiating hard with Jerry Hughes, but they have not been able to finalize anything.  The Bills like Hughes, and would love to get him under a deal, but Hughes and his agent know he is coming off a 2 year streak of 10 plus sacks.  While many may believe he has revived his career, could it be a system?

If the Bills do lose Hughes, one player to keep in mind is Brooks Reed.  Reed has played for the Texans since entering the NFL back in 2011 from Arizona. Reed is a very sound pass rusher, and could be a perfect fit for the Bills scheme.

The Houston Texans selected Reed in the second round (42nd overall pick) in the 2011 NFL Draft. The Texans named him to the starting line-up in the sixth week of his first season, following an injury to starting linebacker Mario Williams.  Williams is now on the Bills and they could be playing opposite of each other again.  Hughes may be a little more athletic than Reed, but Reed can get to the quarterback.

Reed has 14.5 career sacks and 169 career tackles, this move would make sense, and it seems like the Texans are not going to offer him a deal to return.

Outside linebacker Brooks Reed is among the group of players the Houston Texans would like back in the future, but so far they haven’t moved to make that happen. Reed is scheduled to become a free agent on Tuesday, and other teams can begin discussions with Reed, or even scheduling visits with him, on Saturday per ESPN.

I would expect the Bills to at least kick the tires on this option, especially if Hughes is not going to return.