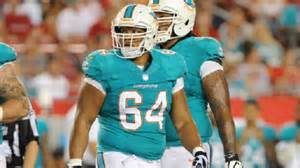 This week the Miami Dolphins released Shelley Smith their former starting offensive lineman, but he has teams hot after him.  According to Jeff Legwold, Smith will be in Denver today to meet with the Broncos staff.  If Smith leaves Denver without a deal, then he will be headed to Atlanta, to meet with the Falcons. The Miami Dolphins have been busy this off-season, but Smith was not in their plans after drafting Billy Turner last year from North Dakota State University in the 3rd round.

vaughn mcclure    @vxmcclure23
Free-agent Guard Shelley Smith is scheduled to land in Atlanta tonight for a Saturday visit with Falcons, according to a source.