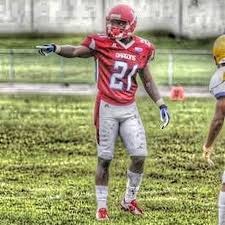 I signed to the university of Memphis so that my mom and family could watch me play. I was initially going to sign with The University of Louisville in ’09 until the staff was changed out. I transferred to Lane College in the spring of 2013

I was born in Memphis , TN but due to the fact that I was a ward of the state I bounced around frim home to home. I’ve lived in Chicago with my former foster parents and I currently reside in Bradenton , Fl with my God father.

I view multiple people as my role model for different reasons and perspectives.  My God father is Bahamas so he  always stay on me about how important family is. My head coach Derrick Burroughs and Earnest Mitchell  whose the head of the IT department at Lane College makes sure that I’m always alert and focus on football from a player’s stand point and business outlook.

Buffalo Bills, Carolina Panthers, Oakland Raiders,  and Tennessee Titans. They all love my size as a corner and the way I’m built overall as a player.”I look like a NFL player”. More importantly because of the adversity that I’ve overcome I’ve became a great character role model for many others and since that’s one of the NFL’s new primary focus I’m far ahead in that category.

I played quarterback for majority of my life. I was just big, fast, and had raw talent so theoretically you could’ve placed me in any position and I would make plays.

My aggressiveness , will,  and versatility separates me from others who play my position.  I can play all downs and in any package. Corner, nickel, dime, and safety as a coach you should look at those attributes as a catch because I’m flexible within schemes. I also play all special teams From being the return man to blocking for the return man and more.

I check for QB tendencies such as which hand is he and which side does he feels comfortable throwing to. For viewing receivers I look at how hard does the guy come off the ball even when he’s not getting the ball. Does he look back with buck eyes and adjust his hands to catch the ball when thrown.  Is he a possession or “Big YAC” receiver.

Albany state’s QB from the 2014  season.  He was tall and stood in the pocket without fear of throwing it down field.  ” unfortunately he could never score on me though” lol.

I would have to say that I’m an athletic corner like Patrick Peterson and I play man to man very well , but I’m aggressive like Chancellor.  I literally picked a receiver off of his feet and slammed him because he caught a pass on me.

Not having consistent guidance until later in my life . It forced me to learn the hard way in a lot of situations.  The murder of my mom in 2011 devastated me. It made me view life in a different binocular.  I went from being slightly hungry to being unsatisfied with anything other than success to my liking.

I love music. I have to listen to music before a game  and I have to pray.

My biggest strength is my physical and mental strength it self. I’m very tough and vivid like a pulp fiction

My weakness is my own emotions.  I’m still young and I’m still trying to figure somethings out about my self and my past so that I can gain ultimate control.  I hate losing and I hate feeling like a loser.

Sir,  as a Gm I’m sure you want a player who can play and I can promise you more than that. I’m not only a versatile football player but,  I’m versatile in life. You won’t have many issues with me if any at all. I can be molded into exactly what you want and need if I’m not there already.  You’ll never have to worry about effort or my attention because I’m always focus, in fact right now as we speak I believe that I’m more focus than you are on getting this job done . Which is selling myself to you!