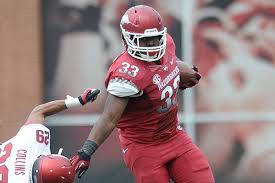 Played for the University of Arkansas

0 teams recruited me out of high school

Went to a junior college, made my highlight tape and emailed every D1 school that utilized a fullback for an opportunity to walk on and earn a scholarship. Arkansas was one of the schools that replied with the opportunity and I chose the razorbacks because I wanted in the toughest division in the toughest conference in college football and felt like I could help the program.

I have not met with any scouts, but did receive compliments from some at my pro day on my strength and mobility for my size 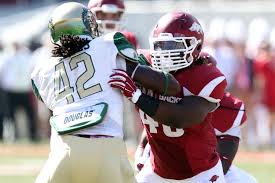 At my position, what separates me is my versatility and strength. I am strong enough, at 257lbs, to deliver effective blocks towards defenders. My versatility comes into play in me having soft, natural hands and the ability to run the ball effectively when called upon. I would say that I am a complete back.

When I am breaking down film, I look at the tendencies of the defensive scheme such as blitzes by formation, which types of defenses are ran against certain offensive personnel, things done based on down and distance as well as individual tendencies for each player

Playing in the SEC you face tough opponents week in and week out so it would be hard to choose jus one overall. However, I would have to say Martrell Spaight because I went against him every day in practice and his intensity and level of play was at a high every time.

If I could compare myself to one NFL player, I would say Mike Tolbert because of his versatility as a run blocker, pass protector, receiver, and ability to run the ball; all things I offer as well

Biggest obstacle I had to overcome was tearing my acl early during my sophomore year at my junior college while I was trying to make a name for myself. I had no recruits or scouts contacting me and had to watch and support from the sidelines for the rest of season. I overcame this my staying mentally strong. I made a highlight tape with the little film I had, emailed every division 1(and some d2) head coach, running backs coach, director of football personnel, and recruiting coordinator that ran a pro style offense with a fullback asking for an opportunity to walk on and earn a scholarship. During this process I was also rehabbing my knee and going to school at attain my Associates Degree so I would be ready when I got my opportunity.

On game day, I just need to have my music with me.

My biggest strength is my mental/physical toughness, football IQ, love for the game, and the ability to rise to the occasion in every situation I am presented

My biggest weakness is that some people would say that I am my own toughest critic which I also believe is true. I hold myself to a high standard and always feel that there is room for improvement.

If I could sell myself to a GM in a second, I would tell him that in me, he would be getting a versatile fullback who would come into the organization with a big chip on his shoulder ready to work and earn everything as I’ve had to do my whole life.

If I could have dinner with three people dead or alive, I’d have to pick Denzel Washington, Albert Einstein, and Bill Gates