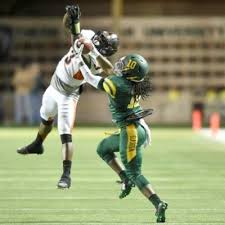 Playing time was big to me, I wanted to go somewhere I could play my first year

Allen Iverson, because he was undersized and overlooked until he was given an opportunity. Not only that but his ability to deal with adversity was unbelievable

I’ve met with a couple at during the all star games I played in after this season concluded. They are interested in seeing my combine times and results

I ran track from 6th until 9th grade

I played running back all my life up until my freshman year in college, then I switched to the slot receiver

My quickness gives me the ability to beat press coverage and get separation with double moves. Along with the ability to take big hits and complete the catch.

I look for player and coverage tendencies, along with holes in the coverage.

Victor Cruz, because he’s really quick and does a lot of the dirty work in the middle of the field in and around the linebackers

Dealing with adversity. I overcame it by realizing that adversity is only a test and a way to strengthen you physically and or mentally. Rather it was injury or not having the role on the field I’d prefer I became stronger and worked harder for what I wanted and with hard work I eventually got it.

My ability to be my own motivator

I tend to hold on to loses longer than I should

Measurable’s don’t always tell the full story, a player should be measured by his production on the field not how tall he is compared to the average receiver. If you want a humble player with a mentality that he can compete an play with anyone that lines up with him I’m that guy. A lot of players drop their head when they don’t get the starting role, but me I’m taking this as an opportunity to prove somebody wrong and take a starters job. I’ll always compete rather I’m starting or 4th string, and my competitive nature will rub off on my teammates and we all know competition brings out the best in true athletes

My favorite player was Warrick Dunn & the Tampa Bay Buccaneers

NFL Draft Diamonds was created to assist the underdogs playing the sport. We call them diamonds in the rough. My name is Damond Talbot, I have worked extremely hard to help hundreds of small school players over the past several years, and will continue my mission. We have several contributors on this site, and if they contribute their name and contact will be in the piece above. You can email me at [email protected]ail.com