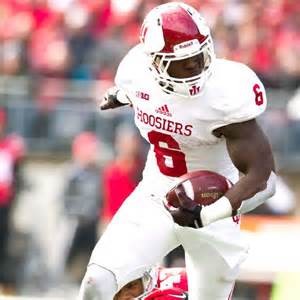 The Detroit Lions have been hosting several rookies to their facility and yesterday the team hosted Indiana’s Tevin Coleman.

Coleman, the second-leading rusher in college football last year (2,036 yards), played most of last season with a broken big toe on his right foot. He underwent surgery to remove a sesamoid bone and reattach a tendon in December and won’t be able to work out for teams until his personal pro day next month.

After the team released Reggie Bush they immediately had a need at the running back position. Maybe not a need that requires them to take a running back early, but definitely a need at the position. The team still has Joique Bell and George Winn, but another speed back could be a good option for the Lions in the mid rounds.