Broncos agree to one year deal with Steven Johnson; Owen Daniels in for visit 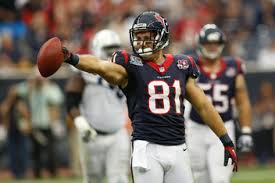 As we reported earlier Joe Don Duncan is in Denver today for a visit, but he is not the only one.  According to Mike Klis of the Denver Post, Owen Daniels is also in town for a visit.

Daniels, 32, has played every snap of his nine-year career with Gary Kubiak as his coach, in Houston then Baltimore. Kubiak was the Houston Texans’ head coach from 2006-13.

The Broncos also have reached an agreement in principle with backup linebacker Steven Johnson on a one-year deal, according to two NFL sources.

Johnson is entering his fifth season. The Broncos worked out the deal in lieu of tendering him a $1.542 million salary as a restricted free agent.