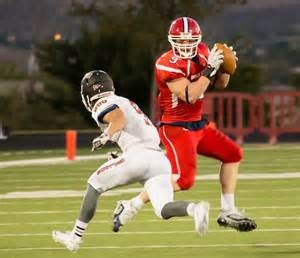 Joe Don Duncan was one of the best small school tight ends in the 2014 NFL Draft. The 6’3, 265 pound tight end from small Dixie State, was set to do big things before getting injured training for his pro day.

Duncan would get invites from the East/West Shrine Game as well as the Senior Bowl, as well as the Combine, but he could not perform unfortunately because while training for his upcoming events he broke his foot.  That injury would cost him most of the 2014 season to heal and recuperate, but now he is back at 100 percent.

According to sources, Joe Don Duncan is en route to Denver today for a work-out.  Duncan was considered a 5th round draft pick by many in last years draft.  Duncan is strong, last year at the NFL Combine with a broken foot, he was still able to bench 225 pounds, 35 times.  That is 8 more than any tight end in this year’s draft class at the Combine.

Duncan did not fall short in the stats column either.  Duncan scored 24 touchdowns in his short time at Dixie State and amassed 1995 yards.  If Duncan is signed by the Broncos, he would be considered a steal in my mind.  Duncan is a great player who is ready to get back to work on the field.