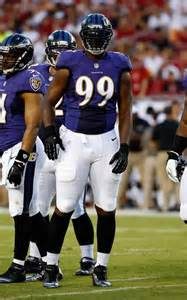 Aaron Wilson    @RavensInsider
Chris Canty had been scheduled to visit the Seahawks on Thursday, but canceled trip to rejoin Ravens on two-year deal

“I’m super excited to come back and be part of a great tradition,” Canty said. “When they released me, Ozzie and I talked about things and they left the door open for me.

“It’s a very talented defensive front. These guys can really play and I’m going to try to teach them as much as possible.”