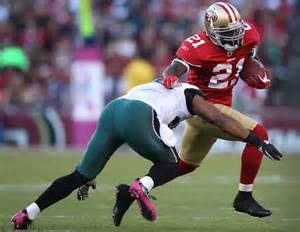 According to the San Francisco Chronicle, Jed York the Niners CEO, wants Frank Gore back in town for another year.

“I think we’ll figure out a way. That’s my feeling,” team CEO Jed York told the San Francisco Chronicle when asked about the prospect of re-signing the veteran running back.

“I mean, Frank Gore, we talk about all the things that he has — you mentioned the leadership and the passion and all those things — but let’s not overlook that he is a prolific running back in the National Football League,” Tomsula said at the time. “I’m a big Frank Gore guy.”

This is good news for Gore as well as the 49ers fan base.  Gore is a special player.