Vince Wilfork wants to play in 2015, but can the Patriots afford him? 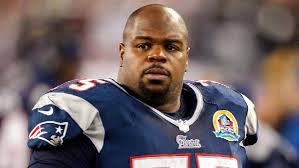 Vince Wilfork the five-time Pro Bowl selection told WEEI-FM’s Dale Holley, via the Boston Herald, on Thursday that he worked too hard to return from an Achilles injury last season to hang up his cleats now.

“I’m already looking forward to next year to see if we can do it again,” Wilfork said. “… I still have a lot of football in me.”

Wilfork is no longer a Pro Bowl-caliber player, but he was still excellent against the run while leading the Patriots‘ defensive line in snaps in 2014. The problem is can the Patriots afford him.  He is due 8 million dollars next year.  That is a lot of money for a guy that is not a Pro Bowl caliber player that is 33 years old and overweight.

The Patriots were able to get to the Super Bowl because the guy did a great job at clogging the middle, but do you think they can keep him?