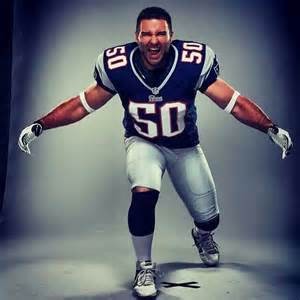 We always hear about amazing stories in the NFL, but no one is talking about Rob Ninkovich.  In 2006, Rob Ninkovich was drafted by the New Orleans Saints in the fifth round (135th overall). He signed a three-year contract with the team on July 18.

In his rookie year he finished with 3 sacks in the preseason and looked like a very good pick for the Saints. During the regular season, Ninkovich appeared in three games for the Saints as a reserve defensive end before suffering a knee injury against the Atlanta Falcons on September 25.  He was placed on season-ending injured reserve finishing the year with only 4 tackles.

He appeared in four games for the team that season as a reserve defensive end while being inactive for the other 12 games. Rob finished the season with only 2 tackles. Ninkovich was converted to outside backer and had 2 sacks in 2008 preseason for the Phins.  He was released during the final cuts and signed to the Dolphins practice squad.  He was activated one game for the Phins before later getting released.

That is what Rob Ninkovich did before he became a New England Patriot.  Since he has been on the Patriots roster, the former fifth round pick has balled out, recording 27.5 sacks since 2009. Since his 6 tackles for the Dolphins and Saints, he has registered 308 tackles, 8 forced fumbles, 12 fumble recoveries, 4 interceptions and 1 touchdown.  That is just in regular season play.  In the Post-season, Ninkovich has 35 tackles, 4 sacks, 2 forced fumbles and one interception.  You might want to keep an eye on him, because this guy has come along way to be successful.  Could Ninkovich win MVP tonight?  He has a story that is of a true MVP.