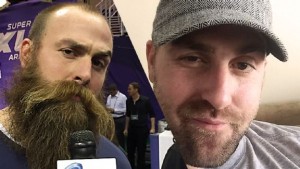 Brett Keisel raised more than $67,000 for Children’s Hospital of Pittsburgh at the fifth-annual Shear Da Beard event, continuing his support of a cause that is deeply personal for the 13-year NFL veteran.

Keisel packed Jergel’s Rhythm Grille in suburban Pittsburgh for his high-profile charity event, and some Steelers fans sported impressive beards of their own as they watched Keisel lose most of his facial hair for a good cause. The money Keisel raises from Shear Da Beard benefits Children’s Hospital’s Division of Hematology/Oncology.

Children’s Hospital is near and dear to Keisel, as Smith’s son Elijah was treated there in 2008 after he was diagnosed with leukemia. Aaron Smith mentored Keisel early in Keisel’s career, and the two were teammates with the Steelers from 2002 to 2011. Keisel has raised more than $250,000 for the Division of Hematology/Oncology, according to Children’s Hospital. He also regularly visits patients at the hospital.

“Over the years, Brett has been a true champion for the kids at Children’s Hospital, and he has a special place in our hearts,” said Christopher Gessner, president of Children’s Hospital. “He’s helped raised money for our cancer research programs, helped support our Free Care Fund and brought endless smiles to our patients with his visits. His heart is bigger than his beard, and that’s saying something.”