Ravens safety wants Antrel Rolle to join him in Baltimore 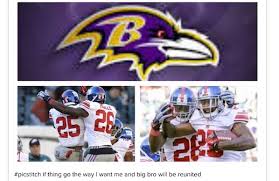 “If things go the way I want me and big bro will be reunited,” Hill wrote on a post that includes four photos of Rolle and himself while both played for the Giants.

This would be a great move for the Ravens who would get another solid piece for their secondary, but Rolle does want to return to the Big Blue.  I guess the money will play a major part in his decision.