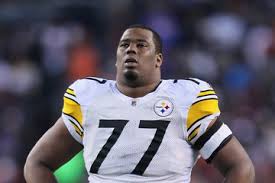 According to Field Yates of ESPN, the Pittsburgh Steelers worked out a deal today to keep Marcus Gilbert happy and also clear up 3.742 million in cap space.  The Steelers are hoping to give Big Ben Roethlisberger a huge contract, but will need to fix their salary cap floor before doing so.
They did so by turning a $3.5 million roster bonus and $1.15 million of his salary into a signing bonus, pushing the hit down the road.

Gilbert played college ball at the University of Florida. Gilbert was born in Fort Lauderdale, Florida. He attended St. Thomas Aquinas High School in Fort Lauderdale, and was a standout lineman for the St. Thomas Aquinas Raiders high school football team. He was also a member of the Raiders basketball team and threw the shot put and discus for the Raiders track and field team.

Gilbert was drafted in the second round of the 2011 draft, and has started in 46 of 47 games as a player on the team.  On August 19, 2014, Gilbert signed a five-year, $30 million contract extension with the Steelers