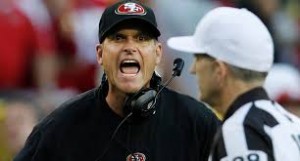 Jim Harbaugh leaving for Michigan was a strange move, especially when the he led the Niners to 3 straight divisional championship games.  Well the former Michigan QB, was told he would not be back before the season was even over.

Tim Kawakami of the San Jose Mercury News reported the 49ers told Harbaugh after the December 14 loss at Seattle that he would not coach the team in 2015.

The 17-7 loss to the Seahawks dropped the 49ers to 7-7 and eliminated San Francisco from playoff contention.  That is pretty crazy if true, but at the end of the day, what are you going to do.  Just sounds like bad business if you ask me.