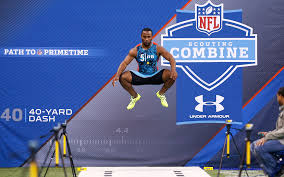 I am asked all the time by future NFL players what is the most important drill at the Combine.  I tell them it is not about being the most important, but the most critiqued is the 40 yard dash.  Well in and interview with Pro Football Talk, Ryan Grigson the General Manager of the Colts, expresses why it is important to him, by basically saying it means everything.

“The actual interview with the player we feel is incredibly important,” Grigson said. “It is where you find out how the player fits in so many ways from primarily a mental and character standpoint. Every year there is a guy who walks through the door that just brings tremendous energy and enthusiasm that is tangible and you make note of those types of strong interactions. The other I would say is the 40 time, not that it is or isn’t the reason to draft a guy, but at the end of the day it helps you assign proper market value to the player. Especially at those skill positions.”

Grigson said the Combine can’t do a lot to change a player’s spot on the Colts’ draft board because most of the evaluation is about what a player did on the field during his college career. But the 40 does matter.

“We honestly don’t touch our board much after the combine,” Grigson said. “I feel that is where big mistakes can be made because you are getting farther and farther away from your initial grade which was primarily off the game film, school visit and live look. Now we do add and move some guys here and there due to guys running terrible, or a player testing off the charts, or for medical reasons. For instance, there may be a WR everyone loved that you think runs 4.5 but runs 4.75 at Indy and you’re just not going to draft that guy realistically so you move him down or to your college free agent board. There’s always exceptions to the rule like Anquan Boldin but they are few and far between.”