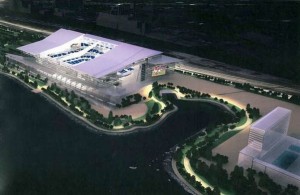 Roger Goodell is from Western New York and today he told Vic Carucci  of the Buffalo News that the Buffalo Bills need a “Next Generation” Stadium for the Bills.

“I’m from Western New York; I love Ralph Wilson Stadium,” the NFL commissioner said during his annual Super Bowl news conference. “But it’s got to compete against a lot of the new stadiums that have a lot of very important features that that stadium doesn’t have.”

“I do believe that a stadium, long term, is going to be needed in that marketplace,” Goodell said. “That’s one of the things” the Pegulas are “evaluating with their franchise: What’s the next generation of stadium? I think that that’s an important consideration for the Buffalo market and that region, but also for the NFL and Terry and Kim.

“So they are going through that process. We will certainly work with them, cooperate with them, and if we can be helpful, we will.”

As a Bills fan I am pumped, what do you think?