Mike Wallace will not restructure his contract with the Dolphins 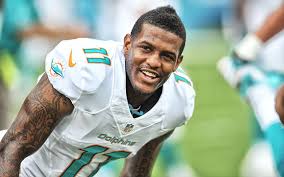 Mike Wallace is not willing to restructure his deal, which means he will probably be traded or cut. While NFL Media Insider Ian Rapoport reports of the Dolphins shopping Wallace, the wideout has no plans to rework his contract to remain with the team.

The Miami Sun-Sentinel reported Thursday that, according to unnamed sources, Wallace has told the Dolphins he will not restructure the final three years and $32.9 million remaining on his five-year, $60 million contract signed in 2013.

According to the Sun-Sentinel, Wallace, displeased with the conservative nature of the team’s offense, would rather test the free-agent market than re-work the details of his contract.

The Dolphins would save $6.9 million on the cap with $5.2 million in dead money this season by cutting Wallace with a post-June 1 designation, per OverTheCap.com.