Michael Sam might not a roster for the NFL, but he will be on Dancing with the Stars 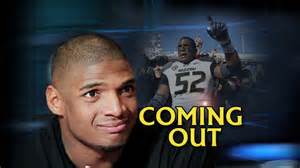 He may not have fulfilled his dreams of having a NFL career, but Michael Sam has found another job. According to TMZ, Sam is headed to ABC’s “Dancing with the Stars.”

Sam has been a free agent since being released by Dallas Cowboys from their practice squad last season. Previously, he was drafted by the Rams but was cut during the preseason.

Last year, Sam made headlines when he became the first openly gay player drafted by the NFL. Sam now joins a long line of NFL players who proved they can dance with the best of them. Both Emmitt Smith and Hines Ward won their DWTS season, along with Jerry Rice, Warren Sapp, and Jason Taylor both coming in second place during theirs. Maybe Sam will be able to show some light feet, which help him get back into a camp?