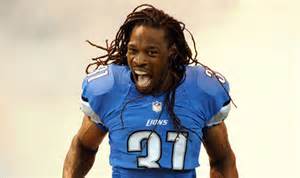 Rashean Mathis started all 16 games at right cornerback for the Lions this past season and finished with the 12th highest grade at cornerback by Pro Football Focus. The average age of the 11 players graded higher than him is 26, and none of those players is older than 29.

Mathis obviously takes extremely good care of his body, but his greatest asset might be his intelligence, and for that reason the Lions want him to return.

Mathis is an unrestricted free agent this off-season, but Lions general manager Martin Mayhew wants the veteran back in Detroit in 2015 according to the Lions website.

“We’d love to have Rashean back. I mean he’s really been a good leader for us,” Mayhew told reporters down at the NFL Scouting Combine in Indianapolis last week. “He’s done a phenomenal job, I think, working with Darius Slay. He has a lot of position versatility, which we didn’t see much of this year because he was starting at outside corner the whole time, but he was a safety in college. He can play inside in the nickel. He’s a very versatile guy. He’s tough. He’s physical. We’d love to have him back.”