Leonard Williams says he is the safest pick in the draft 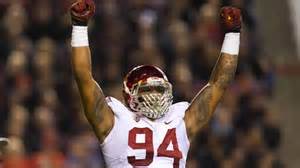 Leonard Williams of USC is a very solid defensive tackle.  He is also a very huge Oakland Raiders fan, but the former Mainland High School graduate says he is shooting for the 1st overall pick.

“I’m shooting for that No. 1 spot,” Williams said at the NFL Scouting Combine. He said that after being asked about getting drafted by the Oakland Raiders at No. 4 overall. The difference between those two draft spots is about $2.5 million.

“I have high expectations for myself and so do my coaches,” Williams said. “That’s just the way I’ve been coached for a long time. It would mean a lot to me and my family to go as high as possible. If No. 1 is the spot, I’d love to be there.”

“I’m competing with quarterbacks at a really different position. I would say from previous years, sometimes it’s taking a chance when you take a quarterback,” Williams said. “You never know what you’re going to get. I’m going to bring a disruption and a physicalness and get to the passer.”

Williams, who had 80 tackles, 9.5 tackles for loss and seven sacks last season, made a convincing argument about why he should be top pick, do you agree?  I do…..