Josh McCown’s deal in Cleveland is worth 15 million dollars 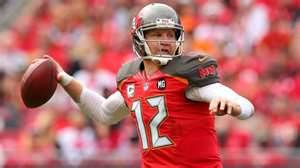 Browns made a move yesterday and I don’t know if it was the best decision.  The team signed Josh McCown to a three year deal.  The team failed to talk with Brian Hoyer, but they signed a 35 year old career back up who has never started a complete season as an NFL quarterback in 12 seasons with 8 different teams.

This does not sound like a very smart signing by the Browns. According to NFL Media Insider Ian Rapoport reported that McCown and the team struck a three-year deal worth roughly $15 million, per a source informed of his deal.

Ian Rapoport    @RapSheet
What’s the market for a hybrid starter/backup like QB Josh McCown? His deal is 3 years worth roughly $15M, source said. Not bad.

That is a great contract, but for a career back-up that is a crazy deal, considering they drafted Johnny Manziel in the first round of last year’s draft.

The journeyman has produced a 17-32 career record since joining the league in 2002. His finest work came two seasons ago in Chicago, where McCown threw 13 touchdowns to just one interception under the watch of Marc Trestman. His play fell off a cliff in Tampa, though, where McCown produced the league’s third-lowest Total QBR en route to guiding the Bucs to an NFL-worst 2-14 record, according to NFL.com