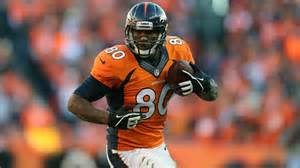 Thomas is considered the best tight end available in the off-season and this draft class is pretty poor.  Thomas will be a huge get for any team, but the Jaguars will be a team that has real interest in the pass catcher from Portland State.

The Jaguars will be “among the most aggressive pursuers,” writes Mike Klis of the Denver Post. The Florida Times-Union agrees that Thomas is a “perfect fit” for a Jags offense desperately in need of a premier red-zone threat.

The Atlanta Journal-Constitution believes the Falcons will also be interested in Thomas, which jibes with scuttlebutt at the NFL Scouting Combine late last week.

Whoever lands him will land a future Pro Bowler, which means Blake Bortles will have a new toy.