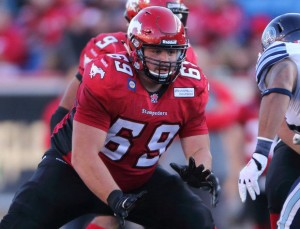 The Giants are taking a shot on Canadian Football League import Brett Jones, and it’s costing them nothing.

Jones, an offensive lineman, signed a three-year deal with the Giants earlier this week with no guaranteed money.

Jones, 23, was the CFL Rookie of Year in 2013 and won Offensive Lineman of the Year honors in his second professional season. He worked out for close to a handful of teams, but the demand to sign him apparently didn’t net any guarantees.